1. Click on this link to read the full poem "To a Mouse" by Robert Burns.  Why do you think the author chose to mention this poem, and indeed to refer to a mouse on several occasions throughout the book? 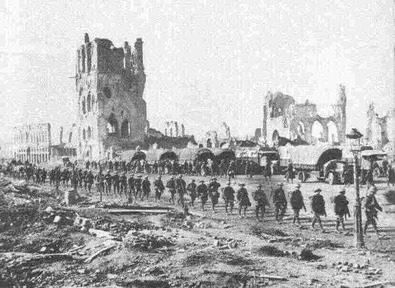 Soldiers marching through "Wipers" (Ieper, Ypres), just as Tommo did
2. When Tommo describes the trenches around Ypres, he says "In places they were little more than shallow dilapidated ditches affording us precious little protection, and the mud here was even deeper than before. There was a sickly-sweet stench about the place that had to be moret han stagnant mud and water. I knew well enough what it was, we all did, but no one dared speak of it." What is Tommo referring to?
Tommo then goes on to say that he is "on stand-to the next morning, locked inside my gas mask in a world of my own".
The debut of the first poison gas however - in this instance, chlorine - came on 22 April 1915, at the start of the Second Battle of Ypres. At this stage of the war the famed Ypres Salient, held by the British, Canadians and French, ran for some 10 miles and bulged into German occupied territory for five miles.  A combination of French territorials and Algerian troops held the line to the left, with the British and Canadians tending the centre and line to their right.
During the morning of 22 April the Germans poured a heavy bombardment around Ypres, but the line fell silent as the afternoon grew.  Towards
evening, at around 5 pm, the bombardment began afresh - except that sentries posted among the French and Algerian troops noticed a curious yellow-green cloud drifting slowly towards their line.
Puzzled but suspicious the French suspected that the cloud masked an advance by German infantry and ordered their men to 'stand to' - that is, to mount the trench fire step in readiness for probable attack.
The cloud did not mask an infantry attack however; at least, not yet.  It signalled in fact the first use of chlorine gas on the battlefield.  Ironically its use ought not to have been a surprise to the Allied troops, for captured German soldiers had revealed the imminent use of gas on the Western Front.  Their warnings were not passed on however.
The effects of chlorine gas were severe.  Within seconds of inhaling its vapour it destroyed the victim's respiratory organs, bringing on choking attacks.
(source: www.firstworldwar.com)
3. Read the following poem by the great war poet, Wilfred Owen, then answer the questions that follow:

DULCE ET DECORUM EST
Bent double, like old beggars under sacks,
Knock-kneed, coughing like hags, we cursed through sludge,
Till on the haunting flares we turned our backs
And towards our distant rest began to trudge.
Men marched asleep. Many had lost their boots
But limped on, blood-shod. All went lame; all blind;
Drunk with fatigue; deaf even to the hoots
Of tired, outstripped Five-Nines that dropped behind.
Gas! Gas! Quick, boys! – An ecstasy of fumbling,
Fitting the clumsy helmets just in time;
But someone still was yelling out and stumbling,
And flound'ring like a man in fire or lime . . .
Dim, through the misty panes and thick green light,
As under a green sea, I saw him drowning.
In all my dreams, before my helpless sight,
He plunges at me, guttering, choking, drowning.
If in some smothering dreams you too could pace
Behind the wagon that we flung him in,
And watch the white eyes writhing in his face,
His hanging face, like a devil's sick of sin;
If you could hear, at every jolt, the blood
Come gargling from the froth-corrupted lungs,
Obscene as cancer, bitter as the cud
Of vile, incurable sores on innocent tongues,
My friend, you would not tell with such high zest
To children ardent for some desperate glory,
The old Lie; Dulce et Decorum est
Pro patria mori.

Notes on Dulce et Decorum Est
1. DULCE ET DECORUM EST - the first words of a Latin saying (taken from an ode by Horace). The words were widely understood and often quoted at the start of the First World War. They mean "It is sweet and right." The full saying ends the poem: Dulce et decorum est pro patria mori - it is sweet and right to die for your country. In other words, it is a wonderful and great honour to fight and die for your country.
2. Flares - rockets which were sent up to burn with a brilliant glare to light up men and othertargets in the area between the front lines
3. Distant rest - a camp away from the front line where exhausted soldiers might rest for a few days, or longer
4. Hoots - the noise made by the shells rushing through the air
5. Outstripped - outpaced, the soldiers have struggled beyond the reach of these shells which are now falling behind them as they struggle away from the scene of battle
6. Five-Nines - 5.9 calibre explosive shells
7. Helmets -  the early name for gas masks
8. Lime - a white chalky substance which can burn live tissue
9. Panes - the glass in the eyepieces of the gas masks
10. Guttering - Owen probably meant flickering out like a candle or gurgling like water draining down a gutter, referring to the sounds in the throat of the choking man, or it might be a sound partly like stuttering and partly like gurgling
11. Cud - normally the regurgitated grass that cows chew usually green and bubbling. Here a similar looking material was issuing from the soldier's mouth
12.  High zest - idealistic enthusiasm, keenly believing in the rightness of the idea
13.  ardent - keen
(source: www. warpoetry.co.uk)

QUESTION: What does the poem "Dulce et Decorum Est" tell us about the experience of a gas attack?  Use 50-100 words.
4. The video below will give you an idea of some of the scenes of the Battle of the Somme.
a) Which scenes from the video are also told in Tommo's story?
b) Using your own knowledge and what you have learned from your history class, explain why some of the men in the video are smiling.